We had such a great Glory Party last Saturday Jan 19th. It was truly a sign of a new season for 2013, with equal measures of glory presence, intoxicating joy and deep mystic trance. There were moments of intercession, words of knowledge, healings, deliverance, and passionate face to face worship. We went up the mountain together, and we all got that glow that one gets with meeting with Him in spirit and truth. 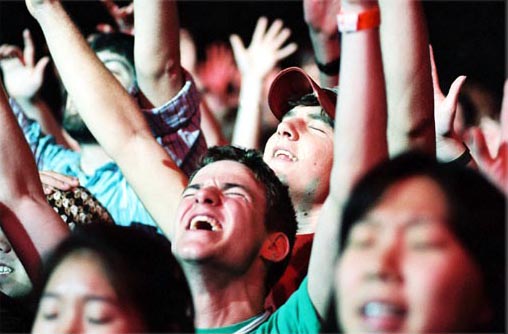 What is this glow?

Exodus 34: The Radiant Face of Moses

29 When Moses came down from Mount Sinai(BL) … he was not aware that his face was radiant(BN) because he had spoken with the Lord. 30 When Aaron and all the Israelites saw Moses, his face was radiant, and they were afraid to come near him. … 33 When Moses finished speaking to them, he put a veil(BQ) over his face. 34 But whenever he entered the Lord’s presence to speak with him, he removed the veil until he came out. And when he came out and told the Israelites what he had been commanded, 35 they saw that his face was radiant.(BR) Then Moses would put the veil back over his face until he went in to speak with the Lord.

The glow is the outward sign of the inward change that happens to a believer in His presence. He is light, and in Him is no darkness. And we become what we behold. So when we meet with Him face to face, we get this glow. Though it is most often not visible with the natural eye, it is nevertheless there in the spirit, and tangible to both the one carrying it and those who come into contact with them (though for some saints, it is outwardly visible: exastrapto…).

So, how do you keep the glory glow after spending so much time in His presence?

The answer is simple yet profound: it is by faith, in rest, without striving. And it is by knowledge (for His people perish for lack of it…)

All too often, we have lost this glow in the past because we simply were not aware that we carried it. We spent time with Him in worship, and we felt awesome. In His presence, all our aches and pains left, all our worries diminished, nothing else mattered but Him and Him exalted for those moments when we were lost in worship.

When we came out of His presence, when the worship stopped, we hummed and glowed for a while longer. But then, we allowed ourselves to drop out of our spirits and back into our flesh and soul, as all of the cares of the world slowly crept back into our minds, allowing a veil to be put in between the light and us, putting ourselves back into the shadow. (Note: Moses put the veil on his face because the glow was frightening to the Israelites… though, actually, the word used here for frightened is more akin to stand in reverential awe, which brings conviction…)

We lose the glow because we are so used to living in our natural state, that we do not recognize that part of having the glow is that our spirits meet with God and begin to take on their true form, transfigured, like Jesus on the mountaintop. We have been unaware of how we got the glow in the first place, which is simply: we stepped into and lived out of our spirit man for that time of face to face encounter.

Part of the key to keeping the glow is to remind yourself that you are a spirit, who has a soul, who lives in a body; not the other way around.

We always say as we sign off a Glory Party: Don’t switch off! Stay aware! Live out of your spirit, simultaneously aware of the unseen realm as well as the natural seen realm.

Even though you cannot see it, when you spend time in His presence, He gets ALL over you. So you glow.

Keep the glow. In fact, fan the flame. Make it glow brighter. Practice His presence in whatever you are doing. Keep your focus on Him whilst you do other things, holy or mundane, sacred or secular.

Keep your glow! And you will carry His presence into every circumstance of your life, inviting Him into every area He was previously unwelcome to. Like wearing a sphere of Jesus influence everywhere you go!

You will be wholly amazed and surprised how many people around you notice, believers or not, when you continually live in that glow. You will alter the reality around you, because you will carry heaven around throughout the earth.

Be encouraged, be empowered, be delivered

One thought on “Keep Glowing!”