Glory Party this past Saturday 28th April was amazingly powerful. Sorry if you missed it. You missed a good one.

We started to worship and praise, singing in tongues to a few chords, every hungry person there instantly engaged. The glory presence was already powerful.

We launched into a Glory Company ‘song’, everyone joining in, but that actually began to pull us into the song, shifting us from the throne room experience.

So we abandoned the song.

We launched back into making sounds and noises instead. We made groans of the inward spirit to the music. We sang in tongues. We oohed and ahhed in melody and harmony, making a joyful noise unto the Creator…

Something amazing began to happen. We began to hear other voices, other instruments that weren’t there. At one point I heard the trumpet playing behind me, and so looked to smile at Jon, but he wasn’t playing, he was still on the djembe!

As people began to add melodies and harmonies with groans and oohs and ahs, several of us in the room began to see the color of the atmosphere shifting from blue to green to orange to red, then clear again. Others began to feel wave after wave moving across the room, some physically feeling it, their bodies moving with the waves. A few felt a breeze go past, like an invisible person moving past them quickly (perhaps as our spirits groaned instructions to the angelic host?).

I saw in the spirit that we were raising the frequencies of the surrounding area. As a word is spoken, it will make a sound wave that reverberates out to infinity, not just in 2D, but in 3d as well. Not just north, south, east, west, but up and down too. There will also be ripples in this and any other unseen dimension as well.

In the study of frequencies in bodies done by Young Living aromatherapeutic oil company, they noted that sickness has a really low frequency, and that by applying oils that the frequency can be raised, moving the body from sickness to health. Dead foods, like man-made genetically modified foods, or brewed coffee, can lower a person’s frequency. Alive foods, like raw fruits and vegetables can raise a person’s frequency, as can laughter, positive words, joy, singing. Kissing your child’s boo boo really can help them feel better!

I could see that as we were worshiping with our sounds, we were raising the atmospheric frequency, and I felt we were affecting the spirit realm. I could see wave after wave of positive ‘energy’ (for want of a better word) emanating from us. I could see it moving across the entire British countryside out in a radius, extending out for hundreds of miles into the surrounding towns and beyond. I could feel it moving in the spirit realm, out into the heavenlies and down into the bowels of the earth.

It was amazing. It was powerful. We stuck a stake in the ground and said, Our God will be praised! Horsham is His! West Sussex is His! The UK is His! Europe is His!

Do something positive today. Smile at a stranger. Kiss your partner or kids suddenly. Tickle someone. Sing a song in your heart, or even out loud on the train! Haha…

Laugh at your problems! Laugh at the enemy’s ‘attempts’ against you!

2 Kings 19:21: “21 This is the word that God has spoken concerning him (the enemy): The virgin daughter of Zion has despised you and laughed you to scorn; the daughter of Jerusalem has shaken her head at you.” 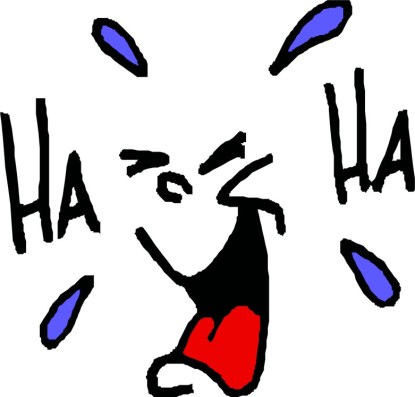 Raise your frequency! Frequently! You’ll be amazed at what a positive change you can affect!