There Is No Spoon…

Last weekend, we went to Wales to lead some worship at Deeper, the Ian Clayton and Michele Perry event hosted by Company of Burning Hearts. It was so whack! Lotta Glory! We had an awesome time, and the teaching was amazing. Box breaking. The mystic realm was open! Lotta sloppy joy!

Ian taught about us needing to realise who we are as sons of the Most High, encouraging us to redirect our thinking from this seen realm to the unseen Kingdom reality. He challenged us that if we want to do as Jesus did, that it would be good to start to build our faith towards those goals. He suggested that we try by starting to stick coins to a wall. This was one of the first things he taught his daughters to do from young. One daughter is now able to stick any small object to any surface. She has her whole Sunday school class stick their prophetic art to the walls of the church without any bluetack or stickytape… (But, of course, she has moved on to much greater feats of faith than just sticking things to walls… ;>) 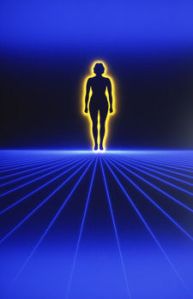 So, we tried it. We prayed in tongues to engage our spirits, and then, in the spirit, we focused on the wall and the coin, trying to ‘see with our hearts’ past the reality of the wall being a wall, the coin being a coin, and gravity being gravity.

After several failed attempts for the first 15 minutes, the coins dropping and dropping and dropping, Seth, my 7-year old, suddenly exclaimed Look! I did it! Et voila… his 20p was stuck fast to our dining room wall. He was so excited, his faith so built up, a sudden explosion of joy hit him, as he announced that this was a miracle and then reeled off all the other miracles this might allow him to do. Faith like a child! 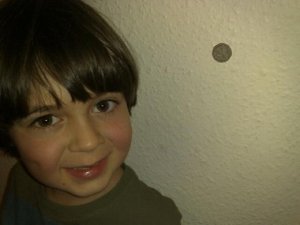 So I swapped tactics. I worshipped Papa. I worshipped Jesus. I engaged Holy Spirit to worship deeper. I held the coin against the wall with just my fingernail, not pressing hard at all, and I worshipped. I sang a love song to Jesus. I wasn’t thinking about the coin anymore. Then,  suddenly, I got this sense, that the coin was now merged with the wall in the spirit realm, the two occupying some bit of spirit space together. And as soon as I felt that, by faith I let go. And the coin stuck to the wall.

What are we engaging? Are we standing on Earth, praying up to Heaven for things to happen and change? Or are we going into the spiritual reality that has been opened up for us by the Cross, and engaging with that? From what reality are we living?

I think we completely missed the point of ‘the Kingdom is at hand’ as a result of the traditional ‘Greek/Western’ reading. The Kingdom is indeed at hand. God’s spiritual Kingdom is where we rule and reign. He has given us every spiritual authority over this realm. It is all around us and very very real. It’s as close as the air we breathe, just waiting for us to engage with it. 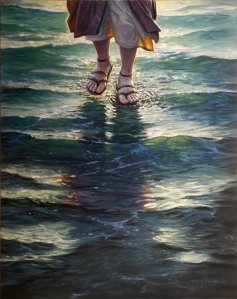 “And these signs will follow those who believe: they will heal the sick, they will raise the dead, they will cast out demons, etc…”

Is that your reality? Or are you one of the many who like the disciples said, ‘We tried, my Lord, but this demon just won’t come out…’ And how did Jesus respond to that? Oh ye of little faith…

Faith only has to be as small as a mustard seed. Or a coin, stuck to a wall… It’s not a creative miracle, but it’s a start…

What reality are you living in? This one, or the real one?

“The trouble is… There is no spoon…”

Time to practically exercise our faith, to give it a platform to grow, to find spiritual paths and begin to walk them, no matter how small a start, so that they open up more and more as we continue to practice. They will open up. Let’s just believe.

Be Encouraged. Be Empowered. Be Delivered.

2 thoughts on “There Is No Spoon…”